I’ve just spent the last 30 minutes or so telling my cousin about Glenn. It wasn’t a subject I’d planned to address, but there seemed no way to explain a part of my life without explaining him. This makes sense, really. Before I awoke from my nap this evening, I’d dreamed about Glenn, a mutual friend we had named Tanya and, of course, about me. I was in horrible emotional pain because Glenn somehow walked away from me and wouldn’t speak to me again. He was with hagbeast and the setting was the college we attended. I remember the agony and I remember his face. What I didn’t know in the dream, and don’t really know now, is why he hated me because of my sexuality. The irony is that, at this point in my life, I honestly, truly do want a male mate. I’m not kicking any lovely, lovely women out of my bed–or life, if that’s the case–but my sexuality has made a 180 degree turn in the last month that’s confused the daylights out of me.

Be that as it may, when I awoke, what I felt was the profound loss. It mirrors the loss I haven’t allowed myself to feel in real life. I don’t think I can run far enough fast enough. I’m going to have to truly feel the pain.

This is in no way meant to diminish what I feel, but the thing that struck me after actually saying a few words to him and being greeted with hostility is that I was dead on about his character and characteristics when I thought he was ignoring me. I am thankful that, as if someone had pushed a button, my emotional armor went up the moment I realized I had managed to fuck up and reach the person–TWICE. I don’t understand that kind of hatred. I never have. He was the last straight person in the world I’d peg as homophobic. Yet, that was part of the rant he used to cripple me and bang my figurative head into the ground over and over again. A decade later, he doesn’t remember and suddenly decided he doesn’t want to. I wish I could have forgotten as easily.

Somehow, the world seems much lonelier than it did. Tanya left me little to no choice except to say one final goodbye. Glenn turned into the narcissist/sociopath/narcissistic sociopath I was truly afraid he’d become with hagbeast. He could go either way and I knew it. That’s one of the primary reasons I stayed with him. Not to get completely hyperbolic (although I’m going there), hagbeast massaged his darker nature. I massaged his lighter nature. He had a devil on one shoulder and an angel on the other. (Please know that I did try to find a substitute metaphor and failed.) It was much easier to be dark, rapacious, mean and evil. Dark always has an advantage. There are things I understand now that I didn’t then. Unfortunately, it’s too late. Even if he wanted to get out (and there’s no evidence he does) he couldn’t. That leaves me to mourn and to write.

A part of me says that I don’t know how we’re going to get through the hell. Another part says that we simply will. It is what we do. Strength above all.

Comments Off on Mourning

Cries in the wind

There are days when I get sad and I don’t know why. I think this is one of those days. I have a feeling that it has to do with reading my old journals last week. I was deep in hell when I wrote those entries. It was almost a foregone conclusion that I’d suicide. Anyone would under the circumstances. 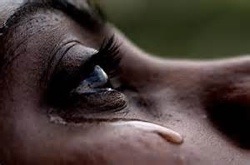 My experience with abuse is long and horrid thanks to the pedophile my mother married. It was so horrible that I had to blank out to endure it. “Blanking out” is called “dissociation.” We all do it at one time or another. The spectrum goes from daydreaming at one end to “dissociative identity disorder,” AKA “multiple personality disorder,” at the other. I don’t remember most of my childhood. I don’t remember most of what was done to me. What I do remember tortures me with flashes and, either when I feel safe or feel extremely vulnerable, I get full-fledged flashbacks. I also get body memories. I think those are the worst. That’s what happened when I began reading the journal entries. I knew that I was in my bedroom–the room where I did my best to end the torture I’d experienced–but I felt the agony that befell me that nightmarish night. For a moment, I seriously thought about suiciding again. Then, I realized that I was in the present, ten years later. Still, I had to scratch and claw my way out of The Pit.

I tried to do the right thing by TEWSNBN and told him what was coming. Since he swore he didn’t remember, I dug out the journals, read them, scanned them and realized it was going to take more time because I was even more prolific then than I am now. I was in the process of a complete meltdown when I wrote those journal entries. The scars on my arms are a testament to the pain I was in. I couldn’t scream, so I burned my arm with a lit cigarette almost down to the bone again and again and again. In addition, I’d cut. Unlike the burn scars, the razor’s scars are barely visible. The irony is that I can blame those on either the cats we had or my dogs because they all have/had sharp claws.

I am so angry that these people thought nothing of what they did then nor today. What was done was so insignificant that it wasn’t even remembered. I don’t know who was at the keyboard that last time, true. However, TEWSNBN was still a huge part of the trap. When I told him what happened, he couldn’t have cared less. What the hell happened to him? Now, I’m just plain curious. It really doesn’t matter because he can’t be “saved.” I’m curious because that’s my nature. I’ll never get an answer because he’s too much of a coward to talk. Oh well.

I am so tired of abusive men. I’m tired of abusive people period. My mother, partly due to physical illness and partially due to mental illness she refused to get treated, was very abusive all too frequently. There were times when I had to hide out in my bedroom with the door locked because she’d charge at me like a pissed off bull. She definitely had physical abuse on her mind. I sometimes kept a knife under the pillow because I was afraid of her. She’d come in when I wasn’t around and take it away. Needless to say, she triggered PTSD episodes, as did her brother, Ted, who walked into my house and started going off on me for something he thought I’d said about him. I hadn’t said anything about him at all. Do you think my mother stood up for me? Nope! The only thing she cared about was that I told him to “Fuck off!” She didn’t care about what he said and did to get me to that point. For example, he said, “That’s why no one likes you!” and a bunch of other stuff. But to come into someone’s home and go off on them about something he thought he heard is inappropriate times two. According to my mother, I was supposed to just stand there, take his shit and endure. No! ! No way!! Why do people think that I’m never supposed to defend myself as if the abuse is acceptable? It isn’t acceptable at all.

I can’t write anymore. I have things that must be done today. I don’t feel like doing anything. I’m tired. I’m just so, so tired.

Comments Off on Cries in the wind